An attorney with HHS’ Office of Inspector General said Thursday that the OIG is hiring additional lawyers to look into taking more administrative actions against doctors. They’re looking for the types of questionable payment arrangements addressed in an OIG fraud alert issued earlier this week. 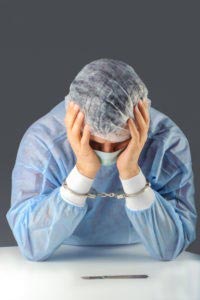 So begins Modern Healthcare’s expose on the OIG’s newly-awakened interest in pursuing allegations against individual doctors.

A number of legal experts agree that the alert, issued Tuesday, could signal that the feds plan to increasingly pursue allegations against individual doctors, rather than just the organizations that pay them. “The OIG’s going to start focusing on physicians,” said Adrienne Dresevic, an attorney with The Health Law Partners, at the conference. “This OIG alert is basically (directed at) the physician community.”

Will this alert, issued after a host of OIG settlements connected to the anti-kickback statute, extend to exclusion screening as well?

On the other hand…  Last month, Dr. Arastoo Yazdani, MD of Maryland paid $42,334.50 for inadvertently employing an excluded individual.  The settlement was a rarity, in a province that has been dominated by fines issued to facilities up until this point.  Dr. Yazdani self-disclosed, so there’s no proof that the OIG would have independently pursued a claim against him.  But if the anti-kickback fraud alert is truly an indication of the OIG’s intended focus for the future, you can’t help but wonder…

Driving Healthcare Costs Down, By Bringing ...

What happened to Small Smiles dentists?

The dentistry was rotten; the teeth were not. If there was ever a practice worthy of exclusion, Small Smiles Dentistry for Children was it.  To quote just one of the many reports released about the ...